I was admitted to the Accident & emergency section of KDAH on 19-may-18 with an incident of seizures and resultant fracture in shoulder. Everything felt fine to start with, but one investigation led to other and ultimately I was diagnosed with a 3cm tumour in the brain. That is when I was introduced to Dr. Hrishikesh Sarkar and his team from Neurology department. The very first and lasting impression that I had from them was that of confident, professional and well-organized unit that inspired confidence and trust. Dr Sarkar has always maintained complete transparency about each procedure, its purpose, relevance, potential risks and impact. Thanks to the effective communication and confidence of Dr Sarkar and his team, when I went for a neurosurgery on 25th May-18 (one day after my 13th wedding anniversary), I was totally relaxed and cool about the entire procedure. It was an awake craniotomy, which meant that I was under local anaesthesia and fully conscious and awake throughout the procedure. However, the environment in the OT was completely relaxed and the way the doctors went about their tasks the surgery was a breeze. It went on for more than 5 hours but to me it seemed to be like under an hour. I was transferred out of the ICU to the ward within 24 hours of the surgery and discharged from the hospital on the 4th day after surgery. On my return home, I met friends and relatives who tried their best to make it appear that I had been through a “major” procedure. But I continue to maintain that it was just another medical treatment, and may be just another day at work for Dr Sarkar and his team. I understand that recovery and “normalcy” would take time, it’s a human body after all and there is no magic here. In fact, my brain needs to train my right leg to walk again. So, I need to be patient here. Also, radiation therapy may be required to manage the remainder of the tumour that could not be removed for strategic reasons. And some of the treatment and medicines have inevitable side- effects. However, with this kind of head start that I got at KDAH, I am confident of full recovery and getting back to all things that I could do before 19-may-18. I would like to express my most sincere thanks to Dr Sarkar and his team for seeing me through this procedure. They are someone who you can trust your brain with… Thank you.

Dear Dr. Sarkar, I just wanted to share how grateful I am for what you have done for Akshay. Him being a 19 year old healthy and fit boy, we never dreamt that he could be diagnosed with something so life threatening. I remember August 20, 2018 vividly. We brought him to the emergency department at KDAH as he suddenly lost consciousness and never anticipated what news we were about to be hit with. I am thankful to all the doctors that attended him in the emergency department for their swift decision making and knowledge. Doctor you briefed my parents in depth about his AVM rupture and the complete risks associated with the operation and the post-operative measures that needed to be taken. While he was on ventilator for a week post the surgery,you kept us informed about his condition and helped us not lose hope in what was the biggest crisis our family had to endure.We are thankful to God that he connected us with you. You are like an angel sent to us from above. You saved his life not once but twice, when one month into the recovery he had a SDH and infection near the surgical site. Thank you for being so cautious and calculative while treating him and being so kind hearted and patient while dealing with me and my family. It's been a couple of days since we discharged him from the hospital post his cranioplasty surgery done by you and can't help but think of what his fate would have been if we didn't encounter you. You are very skilled at what you do,with Akshay being a living example of it. I could see that you were genuinely happy about his recovery and thank you for always being so approachable and quenching my curiosity and being calm even while explaining even miniscule things to me. It's very reassuring for every family to find a doctor like you. Doctor you are doing a noble job saving lives and I wish nothing but the best for you. You along-with your talented team of doctors (a special mention to Dr. Bhushan who had been phenomenal in dealing with us) are doing a fantastic job. I don't think I can ever repay or explain how indebted I feel for what you have done for my brother. No matter which part of the world we are, I will be praying for you and your team's betterment always. I hope you reach new heights in your career as a result of your hard work and your distinguished personality. Wishing the best for you doctor and sending lots of blessings towards you. God gave him life,but you helped Akshay keep it. Regards, Akanksha Dubey

It was a ordinary day for us, on 12th August 2019, Ketan Soni finished his work at night 10pm. He started vomiting at 11pm and had a little bit of headache too. We visited a general physician at midnight 12, who treated him for vomiting thinking it must be food poisoning but he was quite restless and his vomiting didn’t stop. Thus we took him to the nearest hospital at 7am. A senior doctor arrived 2 hours later by then his condition had deteriorated and he was immediately shifted to ICU. To each one of our surprise Ketan was having a stroke. Let me put this in inverts “Stroke can happen to anybody.” Ketan who is just 39 years old, works out 5 days a week, doesn’t smoke, doesn’t drink and can be considered a fit and healthy individual is a prime example of this. A scan at local hospital revealed that a clot had blocked the blood flow in the brain. Doctors performed a procedure called “thrombectomy” to open the artery. After the surprise element we were expecting things to get back to normal in a week’s time. But here comes the shocking part and this was something I had heard for the first time in my life that is brain swelling , (that too in sensitive area called brainstem) like any other part in our body even brain swells. This was the most dangerous episode of my life. To make space for the swelling we have to cut a part of the skull so the brain gets enough space to spread. On advice of our family physician we shifted him to Kokilaben Hospital. I whole heartedly thank doctor Hrishikesh Sarkar and his team at Kokilaben Hospital to successfully perform this surgery. Chances of his survival were bare minimal but we had hope and faith in God, in our doctors and in the power of prayer. Hope is important because it can make the present moment less difficult to bare. It’s important to remember that setbacks, failures and tragedy are part of life. Whether we manage to find joy and success in the daily struggle of life is largely dependant on our ability to persevere through even the toughest adversity without ever giving up. After the surgery Ketan was in ICU for 16 days and later shifted to step down ICU. He started his rehabilitation. He worked with therapist to sit, stand, walk, speak, swallow and other regular activities. Ketan had an “entourage” of supporters including friends and family by his side. On 29th September 2019 he was discharged from Kokilaben Ambani Hospital. Along with Doctor Hrishikesh we would like to thank doctor Tushar Raut and Doctor Abhishek Srivastav for treating him. Today Ketan continues to work hard to recover and lead a normal life. He takes medicines to prevent blood clot and he is determined to not let anything stop him from doing what he loves. So to each and every one who reads this live life to the fullest, you never know when you might stop being the same person you are today. Life is so precious, it can be lost in an instant. ’Health’ and ‘Life’ are not valued till sickness or life threatening accidents occur. The greatest glory in living, lies not in never failing, but in rising every time we fail. May Ketan’s story be a source of encouragement and hope to all who read it. 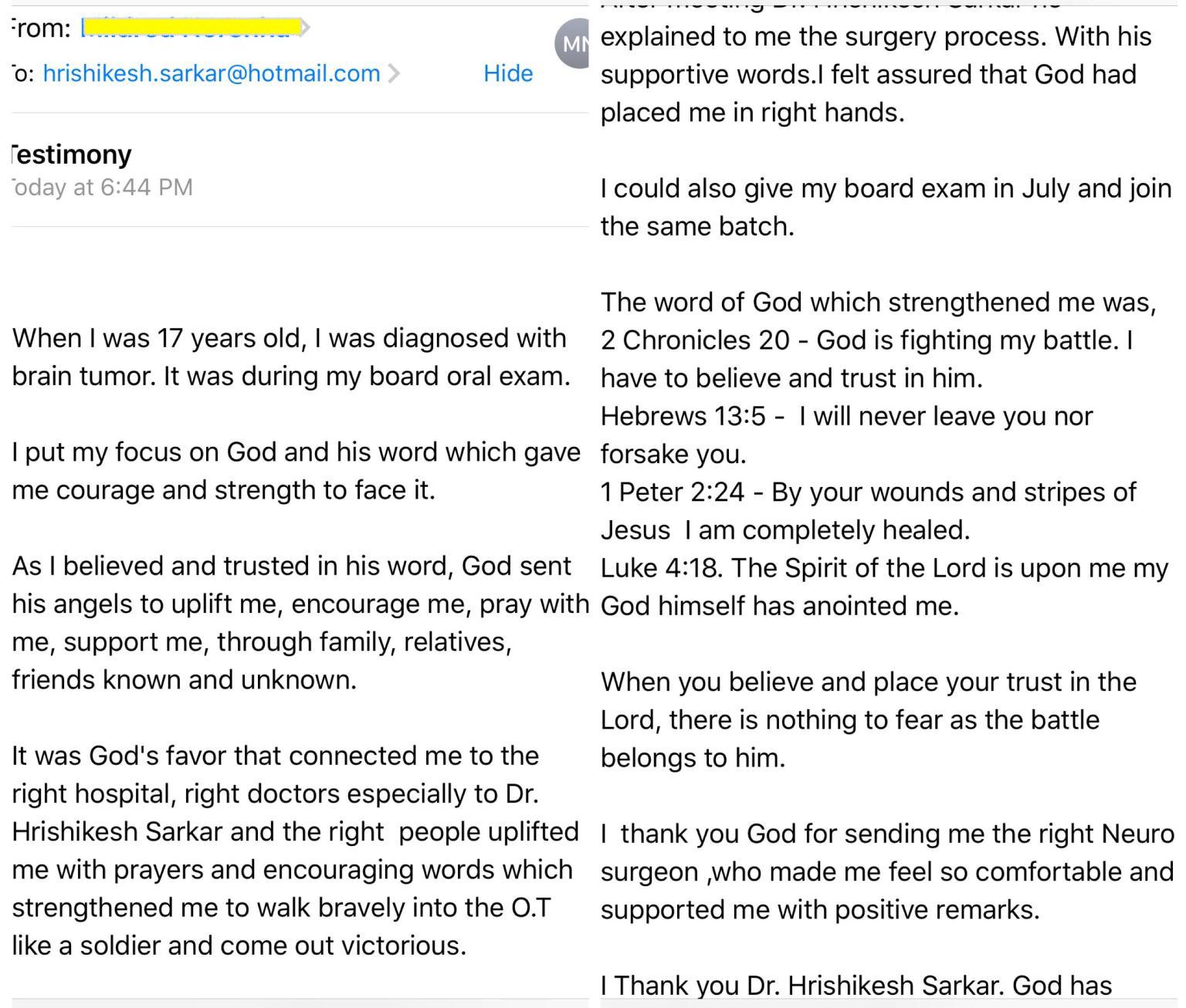